Yes, you read that title right, you can make this healthy gluten free Butter Chicken in 15 minutes if you use thinly sliced chicken breasts. I cook the rice in a second pot while working on the chicken and can usually get an entire meal including some naan (for the family of course) on the table in well under 30 minutes. Plus, I don’t use heavy cream in my version – it’s made with yoghurt or sour cream!

This is one of those meals that makes me not hate cooking for a day, is always a winner wit the family and makes me feel like I’m keeping the kids a little bit closer to the culture (because seriously, nothing says Indian food like Butter Chicken right), so it’s pretty much a winner. I’ve adapted this recipe from one that my girlfriend showed me, which her sister showed her, so I’m not sure what the actual source is. (PS: If you are vegetarian, scroll down to the bottom of the recipe for a great veggie hack!)

Before I delve into the recipe I just want to preface by saying, I am not a food photographer so excuse the lousy photos and the food splatters on my stove. Lesson learned; food splatters are the equivalent of really bad wrinkles in fashion photos.

Random side note (my speciality) – Butter Chicken (Murgh Makhani) is often credited as being a Punjabi dish, but it is actually a dish that originated in the Mughal Empire of India and was considered very regal and not for the commoners. I never had Butter Chicken as a kid, and only really noticed it when it became popular at weddings and parties in the late 90’s. After that it seemed to turn up everywhere; even on pizza and tacos.

*Remember: if you want to serve with rice, put it on the stove now! 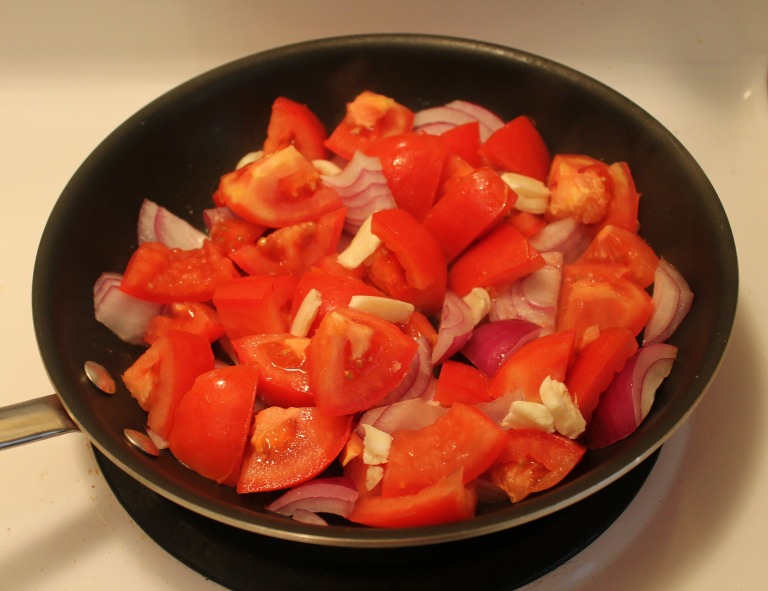 Step 1:
Chop up the tomatoes, onions, and garlic cloves very roughly, season with salt and pepper, and pan fry them for 2-3 minutes just to soften.

Step 2:
Process the onion, tomato and garlic mixture in your chopper until nice and smooth (my kids don’t like it with texture). In the meantime throw the chicken into the same pan and brown for about 6-8 minutes. Don’t forget to season the chicken with salt and pepper! (I always do!)

Remove the chicken from the pan and add the tomato mixture back in. Stir in your spices (I’ve kept them very mild for the recipe but feel free to play around, I usually add a little more garam masala than this recipe calls for). Add in 1/2 a cup of yoghurt or sour cream and mix until blended. I am trying to quit dairy so I usually use yoghurt, on this particular day all we had was sour cream so I used it. 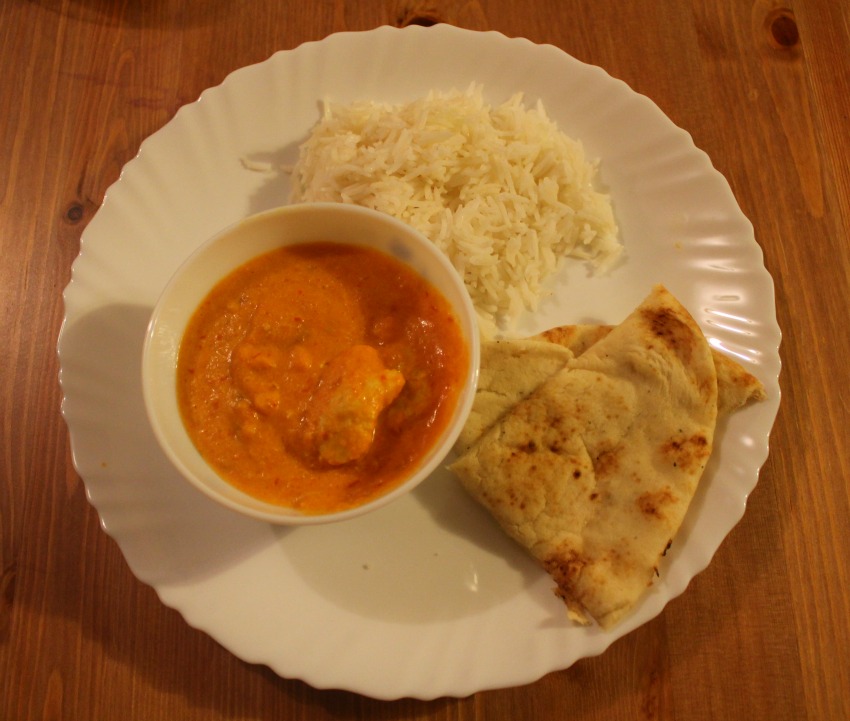 Add in the chicken and simmer together for 2-3 minutes. Serve with rice or naan!

Note: If you are vegetarian, my kids also love this sauce with paneer (Indian cheese available pretty much anywhere lately), or in a pinch I’ve added steamed potatoes and they’ve eaten those too!

So there you have it, my 15 minute Butter Chicken. I’d love to know if you try it! Also, if you’d like to see more recipes, do let me know, and if you enjoy food you really need to follow me on Instagram!

Linking up with Why Fake it When you Can Make it! Over at Bees With Honey