This weekend we had a pretty big milestone at the Thandhi household; Z got her ears pierced! If any of you have be been questioning the right age for ear piercing like I was – Z is 5 1/2 years old. For some people that might be too early, and many others get earrings for their girls when they are only a few months. So the question should really be, is there a right age for ear piercing? 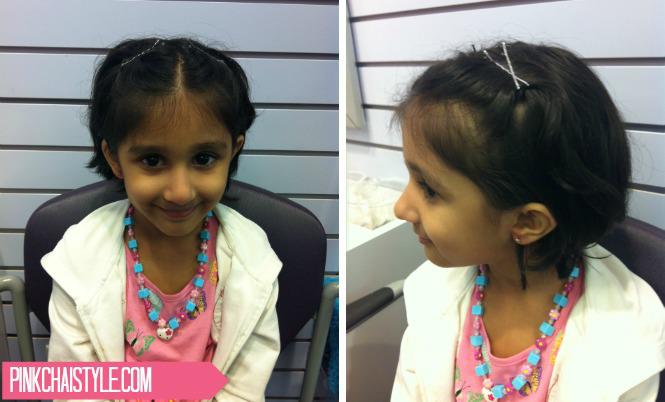 I had gotten her ears pierced when she was about a year old, but she managed to pull out the earring two times, and the second time I didn’t have the heart to go back and get it pushed through again. After that I decided to wait until she asked to have them done, well she started asking a couple of months ago. Right after she decided she wanted a bob cut, even though I gently nudged her towards keeping her beautiful Rapunzel like hair. (This girl has an independent streak like her mama!)

When I was struggling with ‘letting her’ cut her hair, I came across an article where Jada Pinkett Smith talked about why she didn’t stop her daughter from shaving her head and the line that really spoke to me was “The question why I would LET Willow cut her hair. First the LET must be challenged. This is a world where women,girls are constantly reminded that they don’t belong to themselves; that their bodies are not their own, nor their power or self determination. ” So true – with so many messages from the media telling girls how they should look, dress, eat, etc., Z doesn’t need her mom telling her what haircut she should have. This same outlook helps me when  she goes all Punky Brewster with her outfits and accessories every morning, and I’m dying to offer up fashion advice.

So basically I followed the same thought process on whether she was the right age for ear piercing – she asked, she understood it would hurt a little, and she still wanted to go through with it, works for me. A lot of parents suggested that we go with getting both ears pierced at the same time, but the piercer said that only works with kids that can hold super still. Z decided to go one at a time, and there were some tears and freaking out in-between, but once she saw the earring in one side she was able to muster up the courage for the other.

In case you are wondering, we had her ears pierced at Claires, and it was a great experience. The younger girls and cute accessories put Z at ease, and the girl who pierced her ears was very gentle and calm.

Have you gotten your daughter’s ears pierced, any thoughts on the right age, or tips for parents on making the process easier? Would love it if you shared in the comments!

What to Read: Social …